On November 17, 2022, Raymond Flanks was exonerated and freed, almost 39 years after he was arrested for a murder that he did not commit. 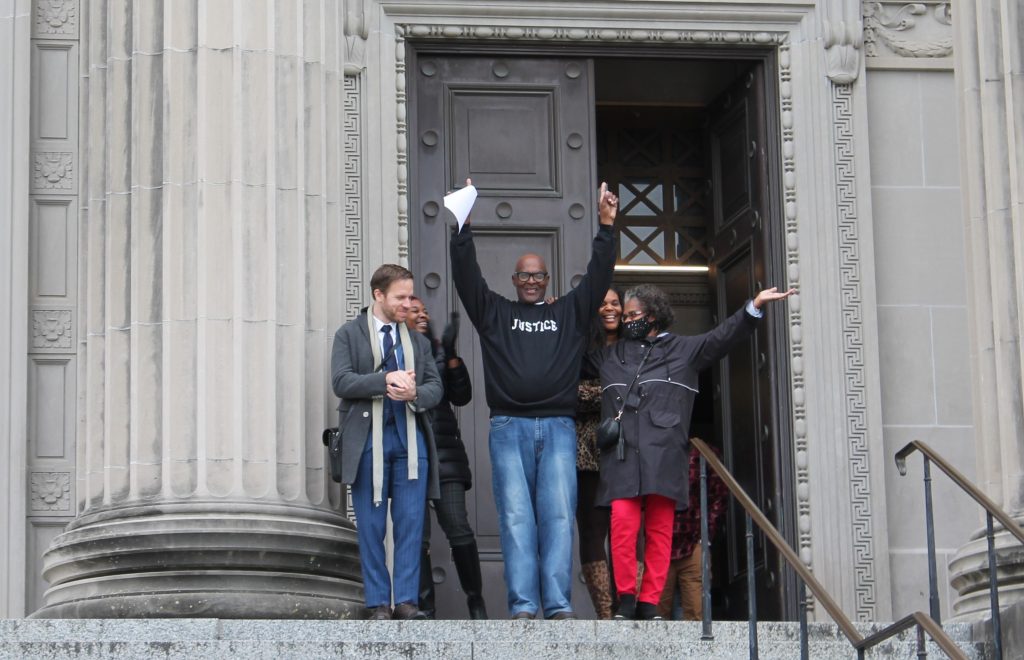 On December 17, 1983, Martin Carnesi was shot in his driveway during a botched robbery. The perpetrator then fled in an old blue car. The crime was witnessed by Mr. Carnesi’s wife, who was understandably distraught. She described herself as hysterical, passing out, and needing oxygen. Nevertheless, Ms. Carnesi said the “one thing” she remembered about the perpetrator was a white blotch on his face. She also reported the perpetrator was in his late 20s. The crime appeared to be part of a spree of robberies by a perpetrator wearing a shower cap. Other victims described the perpetrator as being in his 30s and having a pug nose.

Mr. Flanks was arrested two days before Christmas 1983. He was only 20 and did not have a pug nose or any blemishes on his face. He was driving a new blue car. Nevertheless, Ms. Carnesi identified him after being shown a photo array, using a flashlight to look at photos of Mr. Flanks and another person more closely, picking up Mr. Flanks’ photo—that did not depict a blotch—while saying the perpetrator did have a blotch, and having the detective, John Dillmann, shake his head and say “that’s him.” This was a cross-racial identification—Mr. Flanks is Black and Ms. Carnesi was white.

Despite all the evidence pointing away from Mr. Flanks, the lead prosecutor, James “Jim” Williams, attested that the prosecution had no evidence favorable to Mr. Flanks. The jury then convicted Mr. Flanks based on Ms. Carnesi’s identification without hearing any mention of a blotch or of Det. Dillmann’s comments during the identification procedure. In fact, Det. Dillmann falsely testified that Ms. Carnesi told him that the perpetrator’s only notable facial characteristic was a mustache and that he did not do anything to influence her during the identification procedure. Ms. Carnesi also testified, contrary to her suppressed prior statement, that the new car Mr. Flanks was arrested in looked exactly like the perpetrator’s car. Det. Dillmann furthered this inaccuracy by telling the jury Ms. Carnesi had described a late model car to him (i.e. a new car like the one Mr. Flanks was driving). The jury did not hear that Ms. Carnesi had in fact described an old car initially and Det. Dillmann’s report reflects this.

IPNO discovered the hidden evidence in this case and, in May of 2022, presented it to the Orleans Parish District Attorney (OPDA) Civil Rights Division and requested that the State agree to vacate Mr. Flanks’ conviction due to the violation of Brady v. Maryland, the Supreme Court precedent that requires disclosure of favorable evidence to the defense, and dismiss the case against him. OPDA has agreed. On November 14, 2022, the parties jointly moved to vacate the conviction.

This is another Orleans Parish case in which law enforcement illegally hid favorable evidence. The National Registry of Exonerations has reported that “concealing exculpatory evidence in New Orleans became routine.”[1] NRE data shows that Orleans Parish has the highest known wrongful conviction rate in the country and that over 70% of these cases involve withheld evidence. 96% of the withheld evidence cases were wrongful convictions of Black defendants.

[1] See pages 166 – 69 of Government Misconduct and Conviction the Innocent at: https://www.law.umich.edu/special/exoneration/Documents/Government_Misconduct_and_Convicting_the_Innocent.pdf