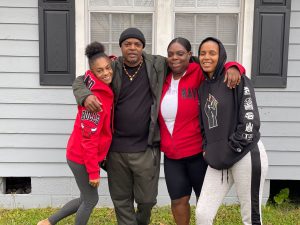 In 2012, Tyrone Mitchell was arrested, tried, and convicted of distribution of cocaine. Despite glaring holes in law enforcement’s narrative of what happened, the fact that he had never committed a crime of violence, and the fact that he was 40 years old, employed, and supported by his church and family, Mr. Mitchell was sentenced to life in prison. His lawyer did nothing to deter the judge from imposing a life sentence. She did not object, file motions, or offer any evidence to demonstrate that Mr. Mitchell did not deserve to die in prison.

For 10 years, Mr. Mitchell performed hard labor at Louisiana State Penitentiary. When lawyers from IPNO’s Unjust Punishment Project learned about Mr. Mitchell’s case, they filed a petition arguing that he was entitled to a new sentence because of the failure of his trial lawyer to protect his rights. On January 19, 2022, a judge agreed that Mr. Mitchell did not deserve to spend one day more in prison, and he is now home with his three daughters, a free man for the first time in a decade.

Having a lawyer that will fight for you makes a difference, especially if you are ensnared in a criminal legal system that makes it harder for accused poor and Black people to receive a just outcome. We are proud to fight for Mr. Mitchell and we wish him every happiness.