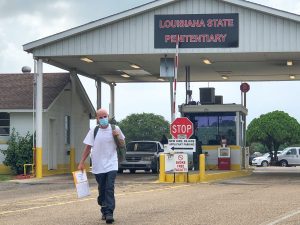 Mr. Swinner was 28 years old in 1999, when he and his friend walked into a second-hand store to sell some speakers. The men behind the counter offered to buy them if Mr. Swinner and his friend could also give them marijuana. Mr. Swinner’s friend had some marijuana and gave the men enough for one joint. The men behind the counter were undercover police officers. Mr. Swinner and his friend were arrested for “distribution of marijuana.” Mr. Swinner was tried, convicted and sentenced to life in prison. His nonviolent prior involvement in the criminal legal system gave the prosecutor the discretion to enhance his sentence under Louisiana’s “habitual offender” law. He remained in prison for more than two decades until IPNO’s Unjust Punishment Project worked with the St. Tammany District Attorney’s office to secure his freedom.

While Mr. Swinner languished in prison on a life sentence, ten states and the District of Columbia legalized the production, sale and use of marijuana, and 24 other states fully legalized medical marijuana. Marijuana is now a multi-billion dollar business in those states, generating hundreds of millions of dollars of revenue for education and social services.