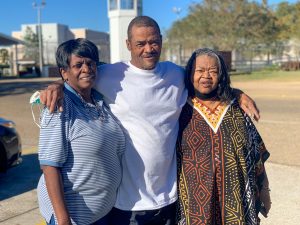 Incarcerated for 23 years, 9 months, and 6 days

Mr. Stevens spent 23 years in prison for selling $20 worth of cocaine to an undercover police officer in St. Tammany Parish. When the officer asked Mr. Stevens about buying cocaine, he went to a person he knew had drugs and brought back one rock to the officer’s car. He was convicted of distribution of cocaine. Without a history of drug convictions, and only two non-violent prior offenses, Mr. Stevens was sentenced to spend the rest of his life at the Louisiana State Penitentiary at Angola. Even though he didn’t think he would ever be released, he patiently worked a steady job at the prison, studied the Bible, and stayed close to his family.

In 2020, IPNO’s Unjust Punishment Project filed a motion for Mr. Stevens alleging that because of changes to the law, his sentence had become illegal, and that he should be eligible for re-sentencing and release. The judge and the prosecutors agreed, and Mr. Stevens was re-sentenced to time served. He was welcomed home by his loving and steadfast family.