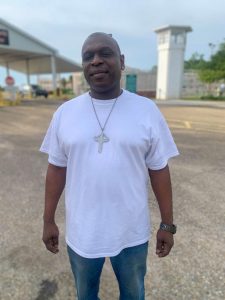 Incarcerated for 14 years, 4 months, and 2 days

In 2006, a New Orleans Police Department (NOPD) proactive patrol task force stopped Mr. Randall for a municipal violation and searched his clothing, finding 0.12 grams of cocaine in his pocket. He was given a life sentence under Louisiana’s multiple offender law and served 15 years before his release. Despite the injustice of his sentence, Mr. Randall maintained hope that he would one day be free. He enrolled in rehabilitative programming, substance abuse treatment, and worked towards earning his GED. IPNO’s Unjust Punishment Project persuaded the Orleans Parish District Attorney’s office (OPDA) to review his sentence and the OPDA agreed that Mr. Randall had already served more than enough time in prison. He was re-sentenced and freed in April, 2021.

Like many Black people in prison for possessing small amounts of drugs, Mr. Randall’s arrest, conviction and sentence stemmed from aggressive policing of a largely-Black neighborhood by officers looking to fill arrest quotas. These units often have used low-level violations to justify searching people for personal-use quantities of drugs. After years of complaints about these kinds of task forces, in the summer of 2020 NOPD finally disbanded them.