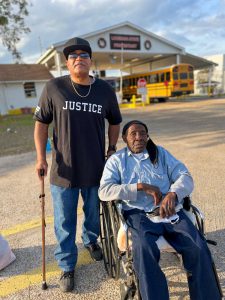 In 1990, Clarence Simmons was arrested for being in possession of a stolen camera and tripod. Even though he was not accused of stealing the equipment, and even though it was returned to its owners, he was convicted and given a life sentence under Louisiana’s habitual offender law. IPNO’s Unjust Punishment Project secured his release in 2021, advocating to a judge that his trial lawyer was ineffective in representing him and in allowing a life sentence to be imposed for such a petty crime. Mr. Simmons was released after serving more than 31 years in prison. He was 88 years old.

Mr. Simmons was incarcerated for 11,444 days. In today’s dollars, it has cost Louisiana more than $500,000 to house and feed him since his arrest. But he has also required expensive medical care, having developed multiple debilitating medical conditions in the last 30 years. Mr. Simmons’s sentence was unnecessary, unjust, and it did not make us safer.