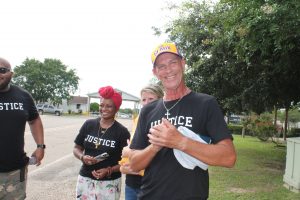 Barney Holt was sentenced to life without the possibility of parole for possession of methamphetamine. Having long struggled with addiction, he had only ever been convicted of drug crimes, but the law at the time allowed the judge to impose a life sentence nonetheless. Mr. Holt has served more than 12 years in prison. On July 7, 2022, at 61 years old, he was re-sentenced and released.

Mr. Holt was a Class B trustee at Angola. He has his GED (earned in 1993), is a master carpenter, and earned certificates from the National Center for Construction Education and Research for HVAC Levels 1 and 2 in 2013 and 2014. He also completed the 100 hour pre-release curriculum, anger management, and substance abuse education classes. He works on the prison’s maintenance crew doing carpentry and construction jobs all over the prison. He was on that crew for eight years. He frequently attended church services.

Barney wanted to continue to contribute to society so he also sent money to the Baton Rouge Food Bank and Stillwater Ministries for nine years while incarcerated.

A judge agreed to resentence Mr. Holt largely because of his truly remarkable records of achievement in prison. We too are awed by what he has been able to accomplish under the most difficult physical and psychological conditions. But people should not have to achieve beyond all expectations to be worthy of a chance at freedom. People should not be shouldered with life sentences for crimes where no one was hurt. People should not be thrown away because they commit crimes of survival in the throes of addiction or poverty or both. We are so happy to welcome Mr. Holt home. IPNO will keep working to bring home everyone unjustly sentenced to spend their lives in Louisiana’s prisons.