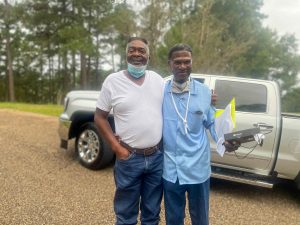 When Alonzo Allen was given a 40-year sentence for drugs, he was 48 years old. He believed he would die in prison. Although people serving drug-related sentences in Louisiana are entitled to a chance at parole, the judge who sentenced Mr. Allen illegally denied him parole eligibility. Mr. Allen spent nearly a decade in prison thinking he had no hope of release. When IPNO’s Unjust Punishment Project learned about Mr. Allen’s sentence, our staff worked to correct the parole restriction.

When Mr. Allen and his IPNO lawyers appeared before the parole board, its members praised him for his commitment to rehabilitative programming, his good conduct record, his thoughtful reflection on the addiction that led him to prison, and his sound re-entry plan. They voted unanimously to release him. After 10 years in prison, Mr. Allen met his brother Claude outside David Wade Correctional Center, a prison he never thought he would leave alive.

There are many people serving long sentences in Louisiana who are ready to succeed in the free world but are still waiting for their chance to prove it. We celebrate Mr. Allen, and we think of those serving draconian sentences rooted in racist laws intended only to inflict severe punishment and create prison labor forces. We will continue to fight these laws and their impact through our Unjust Punishment Project.