Home  »  We should all be outraged

On Minneapolis and Beyond 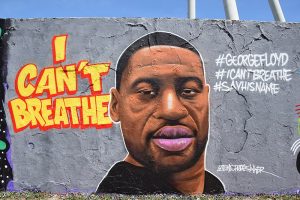 George Floyd was killed by a white police officer in Minneapolis last week during an arrest for allegedly using a counterfeit $20 bill.

Mr. Floyd said, “I can’t breathe” when the officer’s knee pressed down on his neck for more than eight minutes as he laid on his stomach, hands cuffed behind his back. Mr. Floyd, a 46-year-old Black man, was unarmed. The officer was surrounded by three uniformed colleagues. In broad daylight, the encounter was captured on video by citizens concerned for Mr. Floyd. The deaths of unarmed Black men and women by police are now a part of our regular news cycle.
Breonna Taylor
Oscar Grant
Atatianna Jefferson
Alton Sterling
Tamir Rice
Eric Garner
Michael Brown
Akai Gurley
Walter Scott
Philando Castile
Stephon Clark
And too many others.
In 2019, there were 235 Black people killed by police. Black people account for less than 13% of the U.S. population, but are killed by police at more than twice the rate of white people.
The number of Black people wrongfully convicted and imprisoned are similar: Black people make up 47% of exonerations nationally. All but one of the 36 innocent people IPNO has freed or exonerated since 2001 are Black men.
The criminal legal system in the United States does not afford the same presumption of innocence to Black and Brown people as it does to white people. The lives of Black and Brown men and women have been devalued for 400 years in our country when the first enslaved Black people were kidnapped and trafficked to this country. We see it too clearly in police shootings, wrongful convictions, who is disproportionately incarcerated, for what and for how long.
How do we move forward to bring justice to Mr. Floyd and his family, and to prevent future Mr. Floyd’s from dying at the hands of the police?
It begins with accountability. Accountability of the police officer(s) who broke the law and took a life, and accountability of the system that perpetrates oppression and violence on Black and Brown bodies. Policing practices, tactics and trainings must radically change. It also begins with transparency. Communities must have full information and access to citizen and internal complaints and findings filed against police officers. Officer Derek Chauvin who killed Mr. Floyd had a history of complaints and two resulted in discipline. That is a troubling record. As citizens and taxpayers, we all must demand more from police departments.
At IPNO, we are working to hold police, prosecutors and the entire system accountable to be vigilant against racial injustice and oppression in order to build a more just system.
We must demand radical changes. It is time for all of us to come together to strategize, organize, mobilize and VOTE.
The peaceful protest in New Orleans on Saturday afternoon ended at the Orleans Justice Center, better known as Orleans Parish Prison. The organizers wanted to make sure our incarcerated community members could hear the chants of the protesters and know that we are fighting for a more just and equitable criminal legal system for everyone.
IPNO will continue to fight for JUSTICE. For George Floyd and for Breonna Taylor and for our clients.