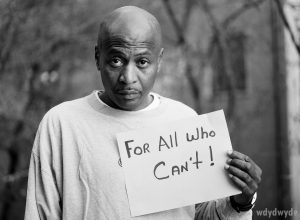 John Thompson – better known as JT – was a friend of IPNO’s office who shaped who we are today.

In 1984, JT was arrested for crimes he did not commit. He was tried, convicted and sentenced to death after the prosecutors in his case deliberately withheld blood evidence showing he could not have done one crime and witness reports showing he did not commit the other. Within weeks of his execution date in 1999, a defense investigator uncovered the blood evidence that proved him innocent. He was exonerated of the robbery. In 2003, a New Orleans jury took only 25 minutes to acquit him of the murder. He sued the prosecutors who framed him and in 2007, a New Orleans jury awarded him $14 million – a million dollars for each year he was on death row while prosecutors kept evidence of his innocence hidden. In the 5-4 decision of Connick v. Thompson in 2011, the United States Supreme Court reversed that judgement in a case that made it significantly harder than it already was for wrongly convicted incarcerated people to sue the prosecutors responsible, even prosecutors who—as in John’s case—deliberately hid evidence.

In 2005, JT and his wife Laverne opened a sandwich shop that quickly became a gathering place for exonerees and other formerly incarcerated individuals. Through this, JT saw the importance of community in helping men recover from the trauma of imprisonment. JT received an Echoing Green Fellowship to help build a nonprofit organization called Resurrection After Exoneration (R.A.E.).  JT raised money to buy what became the R.A.E. House in 2008. The R.A.E. House subsequently provided shelter and helped many folks returning home from prison. Because of his vision, the R.A.E. House became a community center providing education, programs, and mentorship for neighbors, the formerly incarcerated and others in need, as well as a rallying point and gathering place for the social justice community in New Orleans. JT died in 2017 at the young age of 55.

IPNO’s John Thompson Award for Courage and Justice is awarded to a visionary who has dedicated their life to shedding light to dark places and who stands for truth—uncomfortable truth—always.