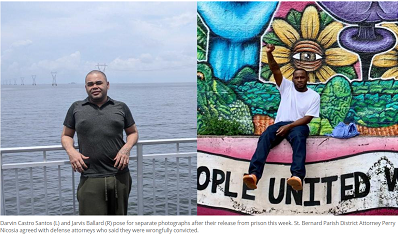 After serving a combined 35½ years in prison, two men were freed from Louisiana prisons this week after St. Bernard Parish District Attorney Perry Nicosia conceded they had been wrongly convicted.

The unusual developments, in separate cases overseen by Nicosia’s predecessor Jack Rowley, were a first for St. Bernard Parish, but they follow dozens more convictions across Louisiana that have been overturned after fresh claims of innocence.

“As far as we can tell, it’s unprecedented,” said Innocence Project staff attorney Charell Arnold. “We’re always happy to get innocent people out of prison. We’re even happier when we can have two exonerations at the same time.”

Prosecutors dismissed charges in both cases and have indicated that they don’t intend to prosecute them again, Arnold said. She praised Nicosia’s office as a “model” for its swift action, but a robbery victim criticized the DA’s decision.

Within hours of his release on Tuesday, Jarvis Ballard met with his mother for the first time in years. He also visited with Jerome Morgan, another former prisoner from the New Orleans area who fought a long battle to have his charges thrown out. Books about wrongfully convicted men helped Ballard get through his prison years, Arnold said.