Home  »  In Louisiana, you can be convicted of a serious crime by a 10-2 jury verdict.

In Louisiana, you can be convicted of a serious crime by a 10-2 jury verdict

Louisianans will get a historic opportunity November 6th to decide whether a non-unanimous split jury vote of 10-2 is enough to condemn a person to prison for the rest of their life. 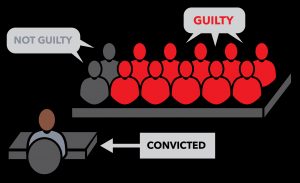 For 120 years, Louisiana has been the only state to allow its citizens to be convicted and sentenced to life in prison after a jury trial in which jurors had serious doubts about the accused’s guilt and disagreed with the majority verdict. A similar practice has been in place in Oregon for 80 years. State Senator JP Morrell carried and passed a bill this session that brings the unanimous jury verdict referendum to Louisiana voters on November 6th, and if successful, the Louisiana Constitution will be amended to require a unanimous jury verdict (12-0) to convict and sentence a person to life in prison.

The genesis of Louisiana’s non-unanimous jury verdict is directly tied to post-Reconstruction when white delegates to the 1898 Constitutional Convention gathered with a specific aim to “perpetuate the supremacy of the Anglo-Saxon race in Louisiana” by limiting the political power of blacks by creating laws to disenfranchise their vote (poll taxes, literacy requirements, etc.) and to dilute their dissent on juries. Their openly racist intent and desire became the rule of law in Louisiana. What the white delegates did in 1898 continues to have far reaching, racially disparate impacts on communities of color.

Extensive research by The Advocate has shown that more black defendants are convicted by a non-unanimous jury than white defendants, and black jurors are twice more likely than white jurors to vote against the majority. Also, because non-unanimous juries tend to deliberate for a much shorter period of time, the quality of the juror discussion suffers and likely contributes to innocent people being wrongfully convicted. In 56% of cases in Louisiana in which the defendant was later proven  innocent after decades in prison were wrongful convictions based on non-unanimous jury verdicts. In other words, there were jurors on these innocent men’s juries who did not agree with the guilty verdict, and yet the law permitted and implicitly encouraged their dissent to be disregarded and silenced.

Louisianans have a chance to take a firm stand against its racist history and demand that the prosecution proves each and every one of their cases beyond a reasonable doubt before depriving a person of their freedom and liberty.

Please spread the word, come out to vote on November 6th, and vote in favor of the unanimous jury verdict constitutional amendment – Louisiana Amendment 2. For more information and to get involved, check out the Unanimous Jury Coalition’s website.