Sullivan Walter was released from prison after being wrongly convicted for a crime in New Orleans. 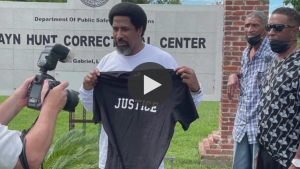 NEW ORLEANS — For more than 30 years an innocent man was held behind bars for a crime he didn’t commit. On Thursday he was released.

Sullivan Walter was convicted of forcible rape. He was arrested six weeks after the crime, and his arrest was based on one composite drawing of a photo lineup. Police didn’t once ask him for an alibi. At trial, he was found guilty based on witness testimony.

Mr. Walter said, “In 1986 I was falsely accused and tried and convicted for a rape that I didn’t commit.”

He spent 12 years in Angola, and the rest of his time was spent in Elayn Hunt Correctional Center.